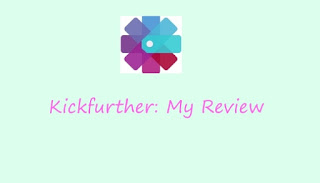 Those of you who follow this blog know that I invest via Kickfurther, which is a platform that crowdfunds inventory for businesses.  My first investment was in April, 2015, so I thought it was time for a review of Kickfurther. 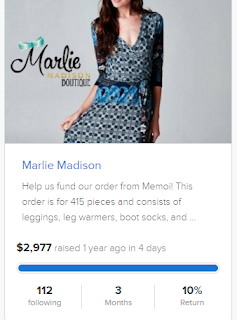 The earliest offer I could find was from Marlie Madison, a Dallas boutique which raised $2977 in November, 2014, and which paid it back, with a 10% return (that's total return, not per annum) less than two months later.  All total, from what I can tell, Kickfurther, as of this writing (1/19) has  122 offers which have been funded and are in the process of payback.  59 which have been paid back entirely and 1 that has been cancelled for non-payment.  Of the 122 open offers, 56 have not reached the point that a payback is due; 64 have.  Of those 64, 43 are paying back on time, at least so far.  After I wrote those numbers, the Reddit that is run by Kickfurther had a post linking to this page which gives up-to-date numbers for Kickfurther.

These appear to me to be  problems:

Now, some of these may finish strong.  I know that Kickfuther has started repossession proceedings against Thump, Chesstache, Marlie Madison, Snow Lizard, Comic Book Displays, My Little Vixen, and Kayson, besides the earlier proceeding against Max Axe Guitar.  In at least some of these cases, Kickfurther has offered to pay back the principal to the investors; stating that investors shouldn't have to pay for them learning how to take possession of the inventory.  Obviously that state of affairs can't continue; investors will have to bear their own losses eventually.

The way Kickfurther is supposed to work is that vendors repay as they sell.  If they sell the financed inventory in the first month, they are supposed to pay back all the money the first month.  If sales are less than expected, payments are reduced, which is good for vendors because if the ship gets stuck in customs or the factory is behind schedule, they don't have to make a payment, or pay more interest.  The advantage for investors is supposed to be that can repossess the property to get at least some of the investor's money back, no matter how badly the business does.  Investors aren't creditors of the business but rather, owners of property being sold on consignment.  That's the theory.

What is reality?  Reality is that at least  four offers are at least two months behind and have paid nothing; which would lead you to believe than they have sold NONE of the inventory.  Perhaps they haven't; however most of them have claimed they have sold some.  My guess is that some goods were sold, and the money used to pay pressing bills.  This is a problem not only because it reduces the investors' yield but also because it reduces investors to unsecured creditors of businesses that are in trouble, which needless to say, is not a good position.  Right now there is only one offer that is paying ahead of schedule; the rest are either behind (not many other than those mentioned) or paying right on schedule.  I find it hard to believe that all those business owners were that good at predicting sales.  I find it far more likely that they are holding money, paying what is necessary to keep investors happy.  From the vendor's viewpoint, it makes little sense to pay back early as it does not reduce their interest.

When these deals work, the return is excellent.  An average rate right now is about 10% in 6 months; usually paid in 3-4 installments.  Annualized this is over 20% per year.  Investors also get the pleasure of helping young businesses grow.  Investors can invest as little as $20 for less than a year.

At this point I have earned $78.50 in returns, plus $15.00 in bonuses.  The annualized returns on all my offers that have finished have been well over 20%.  However, if I had to bear my own losses, if Kickfurther had not agreed to take them over as part of their learning process, I think I would be $81.00 in the hole due to deals that I think will yield little if any recovery for Kickfurther.  Of the others in my account, I have one that is two months late with the first payment and two that are substantially behind schedule.  I think I'm pretty average.

Of 182 funded offers, 3 appear to be total losses and others partial losses.  At an average return of 10% per offer, it would take 30 good deals to wipe out the three bad, and get you back to even, or a 10/1 ratio, just to break even.  19 of the 126 offers that have reached the payback stage so far appear to have trouble.  The odds aren't looking good, but the question to which no one knows the answer is how much will they end up paying back.  Unfortunately for those who pay, in any financing scheme, those who pay not only have to pay enough to cover themselves, but also to cover those who don't pay.  Are the good offers paying enough to make up for the bad?  The jury is still out.

Despite the fact that the overall numbers don't look great, individual offers have done quite well, and right now there are more investors than offers. Today an offer over $170,000 filled in less than a minute.  It was the second offer for the company and they were financing inventory which had been pre-sold.  In other words, unless something totally unexpected happens, there is already a buyer.  The offer was for an 8.5% return over 4.5 months, one of the best recently offered rates--and I wasn't fast enough to get in on it.  In my opinion, a big problem is that there is no effort by Kickfurther to rate these offers and with so many people chasing them, the offered rates are going down.  However, each merchant sets their own offered rate and there seems to be no rhyme or reason to them.  The offers all seem to fill quickly and I think people are going to get burned.  When Prosper started, it used a model of investors bidding on the loans--the ones who bid the lowest interest got the loan.  Unfortunately, the people bidding were not bankers and did not have a good handle on expected losses.  They ended up, on average, losing money.  Since Prosper has been setting the rates, investors who are well diversified have not lost money.  Unless there is some standardization of rates on Kickfurther based on the ability of the company to repay the funds, merchants will continue to lower rates, and, as long as the rates at least appear to be better than investors can get elsewhere, investors will continue to chase those rates, until they start getting burned on defaults.  Once that happens, unless the rates on the winners make up for the defaults the platform will, in my opinion, fail.

Kickfurther is a place for money you can afford to lose.  There are no reliable estimates of earnings or defaults.  Kickfurther has talked about putting in an inventory tracking system, but that hasn't been done yet and so I question how accurately paybacks reflect sales.  While reclaiming and selling unsold inventory has been touted as a feature of Kickfurther, we have no idea how successful such takeovers will be.  Kickfurther is also for people who can be on the computer at 4:00 p.m. Central time, and I don't mean 4:01.  Offers go live then and are generally grabbed immediately; if they aren't, they are either paying less than average or there is something about the product or company that is suspect.

On the other hand, Kickfurther is a new and developing platform.  They are making changes and improvements all the time.  Some of them last and others (like early access to offers, and $5.00 per person referral bonuses) don't.  They are working on inventory tracking systems and they are processing their first cancellation/repossessions now.   They are aware of investors' concerns and say they are trying to address them. Management participates regularly in a Reddit and responds to investors' questions and comments.

I'm going to continue to reinvest the money I have in Kickfurther (when I can get on the site at 4:00 p.m.) but until I see evidence that the overall return is going to be higher than what I've seen so far, I am not investing any more money.  I think the Kickfurther concept is good but right now there are too many investors chasing too few offers and with Kickfurther depending on the honor system to track sales, I think the possibility of getting burned outweighs the probability of making money.  I'll stick with what I have for a while, but it is money I can afford to lose.

Do you invest with Kickfurther?  If so are your concerns the same as mine?  What has your experience been so far?